After completing my honours degree in Social Science in 1991, I travelled extensively in Australasia, including spending 13 months getting lost in a 1971 VW campervan. On my return I couldn’t settle, working in customer service, social work, and finance (to name a few). It wasn’t until after the birth of my two children and the completion of an MA in Creative Writing at Lancaster University in 2010, that I realised I just wanted to write.

Since that point I have had several short stories published in magazines and on-line anthologies  and I’ve won a few writing competitions including, most recently, the DeadPretty Short Story Competition and the Criminal Minds competition.

I’m currently completing a crime-fiction thriller (or two) and experimenting with poetry, using traditional form to write about modern issues.

I contribute to a blog called Wivenhoe Writers

As well as baking, painting, reading and writing, I’m an avid fan of Dr Who, and will watch anything that involves werewolves, time travel or is set in the future. I am also addicted to Scandinavian thrillers- especially the killing (and not just for the jumper). The way to my heart is through books, Border Terriers and cake. 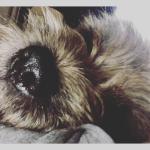